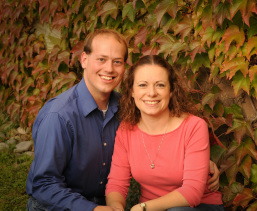 Josh & Katie
Josh & Katie serve at Black Forest Academy (BFA) in Kandern, Germany with the organization TeachBeyond (more information about each of these below). Katie came to BFA in Fall of 2008 as a music teacher. Josh came in January of 2011 to serve in the IT department. They met at the All Staff Breakfast a few days after Josh's arrival, and began dating that June. Josh and Katie married on July 19th, 2014. They are looking forward to continuing to serve the Lord together at BFA!

Josh serves as the IT Supervisor at BFA. His job includes keeping over 250 computers and personal devices running school side, dorm side and for our school community. Josh has also served as an AWANA leader, high school small group leader, assistant sign team coach and class sponsor. Outside of school work, he has also enjoyed being a part of the Kandern's Männerchor (Men's Choir) and subbing at Maugenhard dorm on the weekends.

Katie's role in the Music Department has varied each year. She came in teaching HS Choir (subbing for a teacher who was out with cancer), Music Appreciation, MS hand drums/hand bells/choir, and flute lessons. Since then she restarted the Band program and initiated the beginning of the Pep Band to cheer on BFA's Falcon Basketball Teams. She has now been serving in the role of the Music Department Head for the last four years. She has also been involved in dorm subbing, class sponsoring, outreach ministries, missions trips (Germany, Romania), mentoring, independent studies (in Sign Language and music), and enjoyed coaching the Sign Team the whole time. She also enjoys subbing at the Maugenhard boy's dorm on the weekends. 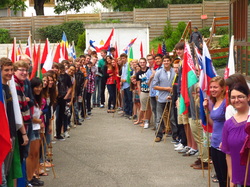 BFA
Black Forest Academy was founded in 1956 and is located in the Black Forest Region of southwestern Germany. Black Forest Academy provides a quality, international, Christian education that equips its students to influence their world through biblical thought, character and action. BFA serves missionary families in over 50 countries throughout Europe, Central Asia, the Middle East, and Africa. The BFA educational and residential programs help students develop a biblical perspective of life and train them to fulfill God's purpose for their lives personally and vocationally.

TeachBeyond
TeachBeyond was founded in Canada in 1954 by the Janz family, who wanted to bring hope to post-war Germany. The mission was previously named Janz Team Ministries. TeachBeyond focuses on educational services, such as English language camps, professional seminars, and schools. TeachBeyond is represented in countries from Southeast Asia to northern Africa, Brazil and  various countries in Europe. "The name TeachBeyond reflects the organization's commitment to teaching beyond one-dimensional, utilitarian forms of education to a comprehensive, holistic form of education."

Learn more about TeachBeyond at www.teachbeyond.org 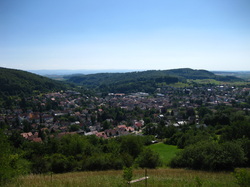 Kandern, Germany
BFA is located is Kandern because it is a small, quiet, safe location for the students.
You can walk from one side of town to the other in 15-20 minutes in any direction.
The main campus and several dorms are located in town,
​while others are located in nearby towns.